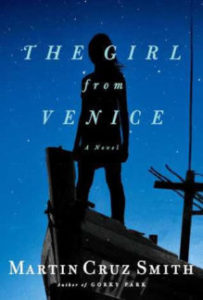 Martin Cruz Smith’s latest novel, The Girl from Venice (F Smi) takes place in Pellestrtina, a small fishing community on one side of the Venice Lagoon in 1945.

It is almost the end of the war, but while most citizens are tired of the fight, the Germans are still in Italy and Mussolini’s followers and the partisans don’t want to give in quite yet.  Many are positioning themselves for after the occupiers leave and Mussolini’s power has waned.  No one knows who to trust.  A young woman’s body floats in the lagoon and is picked up by a local fisherman. The girl, from a wealthy Jewish Venetian family is still alive and has run from the Wehrmacht.  The fisherman, Cenzo chooses to protect her and so begins this twisted tale.