Having been in Israel two weeks ago, I was reminded how closely the Jewish holidays track the actual weather. With rare exceptions, the end of Sukkot brings the arrival of rain.

Our liturgy reflects this. From late spring until fall, we add to the Gevurot the words, מוריד הטל״ Morid Ha Tal, God who brings down the dew.” From the end of Sukkot, however, we say “משיב הרוח ומוריד הגשם Mashiv HaRuach u’morid haGashem, God who returns the wind and brings down the rains.”

This year, the rains in Israel have been delayed but the wind arrived right on time. The result has been a week of dozens of brush fires, some of which, with the high temperature, high winds and low humidity, have grown quite large.
This Shabbat, I'm thinking of Israelis and Palestinians, 60,000 of whom have had to be evacuated from their homes and neighborhoods.

This disaster has brought positive moments, like the many European and Middle Eastern nations who have lent Israel their fire-fighting aircraft, including the Palestinian Administration which has loaned four fire trucks and crews (the US remains conspicuously absent from the efforts).

Less positive are the experts’ conclusions that at least half of the fires were set intentionally by arsonists. My teacher, Dr. Yehuda Kurtzer made a pertinent analogy:

“Every society has its arsonists, the literal and the figurative. Arsonists hope not only to inflict damage on their targets but to create mayhem, to invite and incite those who would fan the flames and turn a fire into a conflagration. This is happening already on social media, with a spate of horrifying hashtags celebrating the fires; and in the proclamations of politicians leveraging these crimes towards counterproductive narratives of collective responsibility. Fire spreads quickly. I pray for those whose lives and homes are at risk; and for the wisdom of societies, theirs and ours, who respond to arsonists by fighting the problem itself: working together to contain the flames, locating the perpetrators, and remembering that terror - if that is what is Israel is facing - is aided, and not addressed, by fueling the flames.”

Here at home our political arsonists have been hard at work, too. The fires started and fed by the run up to election are proving difficult to extinguish. Between Twitter and Facebook, tempers still flare, insults, belittling and hateful comments still are exchanged.

It is a sad state of affairs. One wonders how positive the introduction of social media actually has been.
Yet, we know that social media can be a force for good. I was reminded of this as two particular posts have been making the rounds. The first was written during WW II by Pastor Reinhold Niemöller.

The words convey a truth history has confirmed time and again: that silence in the face of injustice isn’t neutrality; it is siding with the oppressor.

As Eli Weisel put it:

Or as Dr. Matrin Luther King Jr. said:
“The hottest place in Hell is reserved for those who remain neutral in times of great moral conflict…[an individual] who accepts evil without protesting against it is really cooperating with it.”

Make no mistake about it. If you want to see the face of evil, look at those who, since the election, have been rubbing their hands with glee. They may have taken on new, sanitized names, like White Nationalists, or the alt.right, but they are the same old white supremacists. They’ve just left their white robes and hoods in the closet for now.

Since the election, they’ve celebrated a number of chilling cabinet level appointments. Steve Bannon, nominated to be a senior advisor and strategist to the new president, and most recently the head of Breitbart.com, is their hero. He rarely holds back from telling us what he thinks. When asked about the alt.right being racist, he replied:

His progressive views on women are expressed in this quote:
“That’s one of the unintended consequences of the women’s liberation movement––that, in fact, the women that would lead this country would be feminine, they would be pro-family, they would have husbands, they would love their children. They wouldn’t be a bunch of dykes that came from the 7 Sisters schools.”

And the political left? Bannon believes that progressivism is essentially nothing more than a philosophy of victimhood.
“They’re either a victim of race. They’re victim of their sexual preference. They’re a victim of gender. All about victimhood and the United States is the great oppressor, not the great liberator.”

Is Bannon an anti-Semite? I really don't know. But a number of those who embrace his work clearly are. Consider the blood chilling scene that unfolded at last weekend’s conference at the government owned “Ronald Reagan Conference Center:”

At last weekend’s DC meeting, [Leading alt-right ideologue Richard Spencer] railed against Jews and, with a smile, quoted Nazi propaganda in the original German. America, he said, belonged to white people, whom he called the “children of the sun,” a race of conquerors and creators who had been marginalized but now, in the era of President-elect Donald J. Trump, were “awakening to their own identity.”
As he finished, several audience members had their arms outstretched in a Nazi salute. When Mr. Spencer, or perhaps another person standing near him at the front of the room — it was not clear who — shouted, “Heil the people! Heil victory,” the room shouted it back.

Having taken in all of that distressing news from the internet, you can understand that I found it heartening to find the following on the internet. It's a reworking of Niemöller’s poem for today:
“First Trump came for the women
And I did not speak out
Because I was not a woman.

The Trump came for the Mexicans
And I did not speak out
Because I was not Mexican.

Then Trump came for the gay, bi and trans people
And I did not speak out
Because I was not gay, bi or trans.

Then Trump came for the Jews
And I did not speak out
Because I was not a Jew.

The Trump came for the journalists
And I did not speak out
Because I was not a journalist.

Then Trump came for the judges
And I did not speak out
because I was not a judge.”

And now Trump is coming for the Constitution of the United States. And if I do not speak out, what am I?
(Gideon Lichfield)

Friends, I don’t know what Donald Trump believes – it’s not clear if anyone, including himself, does. But I do know that his hangers on, the white nationalist alt.right crowd needs to be fought every step of the way.
It’s not time for silence.
It’s not time for indifference.
It’s time to raise our voices in sacred protest.
Amen 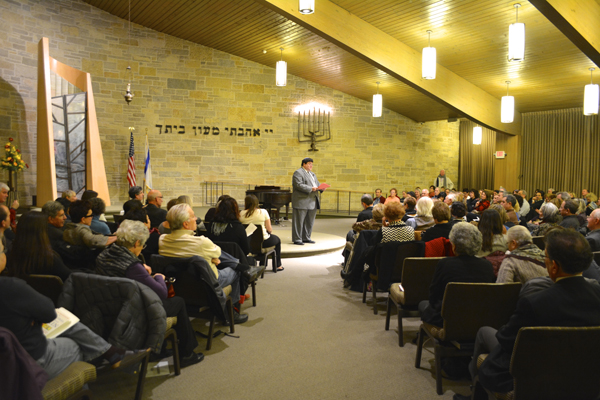