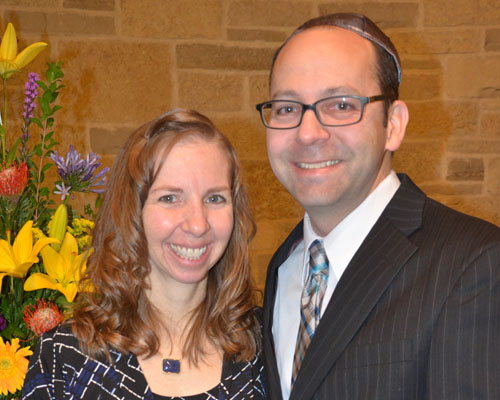 Jenni and Gordy Goldbaum are delighted to be recognized with the Keter Malchut Crown of Exemplary Leadership Honor this year. The Goldbaum family became members of Congregation Sinai in 2005, not long after moving to Whitefish Bay from the Chicago area.  They were immediately struck by the warmth and openness Sinai had offer, and quickly became involved.

Jenni has served on the Sinai Board of Trustees since 2009.  During that time, Jenni spent 5 years as a Youth Education Committee Co-Chair, initially with Anne Golding, and then Judy Flegel.  Jenni and Anne received the honor of being named Congregation Sinai’s “Volunteer(s) of the Year” in 2011.  Additionally, Jenni received the Coalition for Jewish Learning School Support Award in 2013 for her work on the Youth Education Committee.  Currently, Jenni serves on the Executive Committee as the Secretary, and is the Co-President of the Women of Sinai along with Bobbi Rector.  Jenni works at Children's Hospital of Wisconsin as an Occupational Therapist in the Neonatal Intensive Care Unit.

Gordy has been involved in Congregation Sinai’s Youth Education program as a yearly volunteer in the High Holy Day Youth Program.  Additionally he has taken the lead (along with our son, Jayson) on planting, caring for and harvesting the Sinai Sukkah Garden for the past 3 years.  Currently, Gordy is co-leading the “Sinai Brews” affinity group, bringing his love and expertise of crafting beer to Sinai.  In addition, Gordy volunteers his time printing many of the mounted posters you see in the lobby of our synagogue.  Gordy is an Industrial Designer and works in Racine at the Great Northern Corporation where he designs Point of Purchase displays.

Jenni and Gordy have 2 children, Maya (age 18) and Jayson (age 14).  Both went through the religious school program here at Sinai.  Maya is in her freshman year at the University of Minnesota where she is studying Elementary Education and Spanish.  Maya severed for 5 years as a Madrich at Sinai, and spent 2 of those years  taking a lead with teaching and sharing music with the Religious School children.   She currently teaches youth music and provides guitar accompaniment for the Youth Choir at Mount Zion Temple in St. Paul.  Jayson is in 9th grade at Whitefish Bay High School and is part of the Madrichim program again this year, assisting in the Religious School classrooms.  Additionally, he has remained involved in planting and harvesting the Sinai Sukkah Garden for our Yom Kippur Youth Programming.

Congregation Sinai and the people that the Goldbaum’s have met here continue to teach, inspire, and help them to feel connected to our Jewish community.