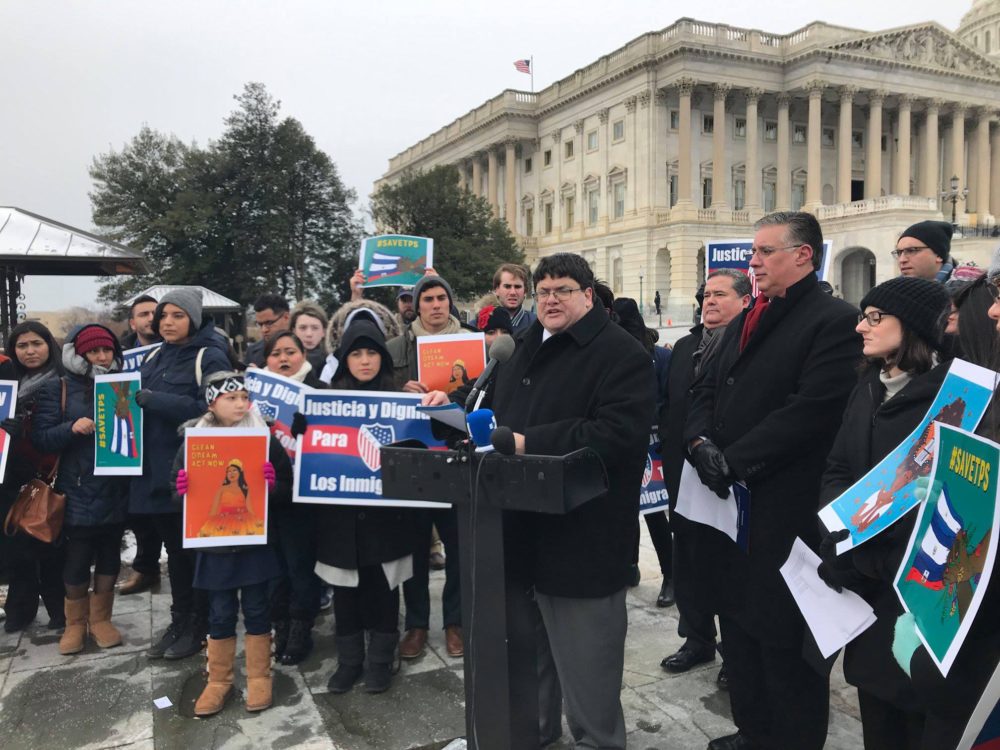 Words delivered by Rabbi David B. Cohen on Capitol Hill during a joint press conference of National Latino groups alongside Jewish and Catholic faith leaders teaming up to protect Dreamers and refugees (January 17, 2018)

The Biblical book of Joel describes a utopian, messianic future, a time when: “the old shall dream dreams and the youth shall see visions.” (Joel, 2:28) Throughout human history, Dreamers have always pointed the way. As the Book of Proverbs puts it: “Without dreamers there is no vision; without vision the people perish.” (Proverbs, 29:18)

The Dreamers here with us today are the promise of America’s future. Our moral obligations to them flow from the Torah’s value of human dignity. Created in God’s image, each and every human is of infinite value, each is utterly unique and each is co-equal to the other. We are commanded to love and care for those who lack power, the poor, the widow, the orphan and the stranger, to treat them with dignity and respect. “There shall be one law for both the native and stranger,” says Leviticus (24:22). One standard for justice and compassion.

Yet, had the prophets never spoken, Jewish history would compel us to action. From the time of slavery in ancient Egypt through the DP camps of Europe to the gates of Ellis Island, we have been immigrants. At times a despised minority, we know all too well the fear and ill will that surround those who are different.

• When we hear immigrants collectively described as rapists and murderers, we remember how our ancestors were accused of blood libels and poisoning wells. We know these accusers; we have faced them before.

• When our elected leaders fan flames of fear into a firestorm of prejudice and hostility, we remember other demagogues who made the powerless scapegoats for all of society’s ills. We know these demagogues; we have heard their dog whistles before.

• When bureaucrats separate family members, deporting some to countries where they know no one and don’t speak the language, we recall the Kindertransport and the selections at Auschwitz. We’ve stood before such soulless bureaucracies before.

• When private prisons under contract to US Immigration customs and enforcement violate federal anti-slavery law by forcing tens of thousands of immigrants to work for a dollar a day or, sometimes, nothing at all, we remember how wartime industrialists at IG Farben and Volkswagen once took advantage of such forced labor. We have seen such craven, immoral opportunists before.

• When innocent children are held liable and punished for their parents’ choices, we see a violation of basic fairness. We have experienced such injustice before.

In the face of current attacks on human dignity, we can’t help but recall our own immigrant forebears, and reflect: “There but for an accident of history, Go I.” In other words, A generation or two or three ago, it would have been me standing where you, the Dreamers, are standing.

If religious tradition demands our care and concern for the stranger, how much the more so should we care for those who have grown up in America practically their entire lives, especially, when we already have signaled their acceptance by establishing DACA and encouraging them to sign up.

Now is the time to make good on that promise and to vote for human dignity. In so doing, we will fulfill God’s expectations expressed in the book of Micah (6:8): that we will do justice, love mercy and walk humbly with God,” and, by so doing, take an essential step to “Make America Great Again.”