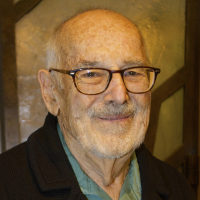 Rabbi Jay Brickman served as the spiritual leader for Congregation Sinai from its founding in 1955 until his retirement in the early 1990’s. Rabbi Brickman remains a vital presence at Sinai, teaching a variety of classes to our congregants and providing mentorship for our clergy.

Rabbi Brickman was born in New York City and graduated from the University of Michigan with a Bachelors of Science degree in Psychology. He was ordained rabbi and awarded the Doctor of Divinity and Master of Hebrew Literature degrees from the Hebrew Union College-Jewish Institute of Religion. He is the author of three books, the most recent is called Poetry Doodles.