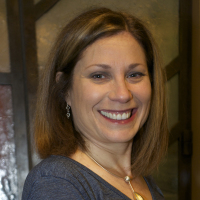 Karen Berk joined the staff of Congregation Sinai as Director of Administration in September 2009. Her responsibilities include management of the synagogue’s office, budget and facilities. She and her family are also active members of the congregation.

Born and raised in the suburbs of Chicago, Karen first came to Wisconsin as a camper and, later, counselor at the Union of Reform Judaism Olin Sang Ruby Union Institute in Oconomowoc. She earned her Bachelor of Science in public administration, personnel, labor relations and management from Indiana University, Bloomington, and spent most of her career working in human resources and benefits with large manufacturing companies which brought her to Milwaukee in 1993.

“It is my great hope and desire that by being part of the Sinai professional staff, I am able to continue making Sinai a warm, welcoming, and comfortable place for all. I also want my children and our children to think of Sinai as home just as I do and I’m excited to be part of making that happen.”