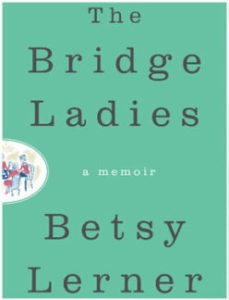 The Bridge Ladies: A Memoir by Betsy Lerner (B Ler).

When Lerner’s mother, Roz became ill, Betsy somewhat reluctantly stepped up to care for her.  Because their relationship had been one of strained civility over the years, Lerner attempted to learn more about her mother in order to understand and even like her better. Lerner had defined herself against everything her mother’s generation stood for, and now needed to spend an inordinate amount of time with a person whose values seemed counter to her own. Lerner underscores this point by noting that women of her mother’s generation all married Jewish men, their children, intermarried and their grandchildren married inter-racially.

Lerner decided to accompany Roz to her Monday bridge games, seeing Roz’s interactions with her friends of more than fifty years.  As a child, Betsy had made herself scarce during these games, but now she not only attended the games, but also learned to play bridge. Lerner recounts many of the discussions that go on before and after the games. They discuss obituaries of local friends, public figures and movies stars, especially if they are Jewish.  She said, the “ladies would make a killing on a Jewish-themed games of Jeopardy.  Alex, I’ll take Jewish Beauties for $100.” This was one of my favorite lines in the book, because my grandmother, while a generation older than these ladies, did exactly that.  To this day, I feel the need while watching a movie or TV show with my husband to announce each person who is Jewish.